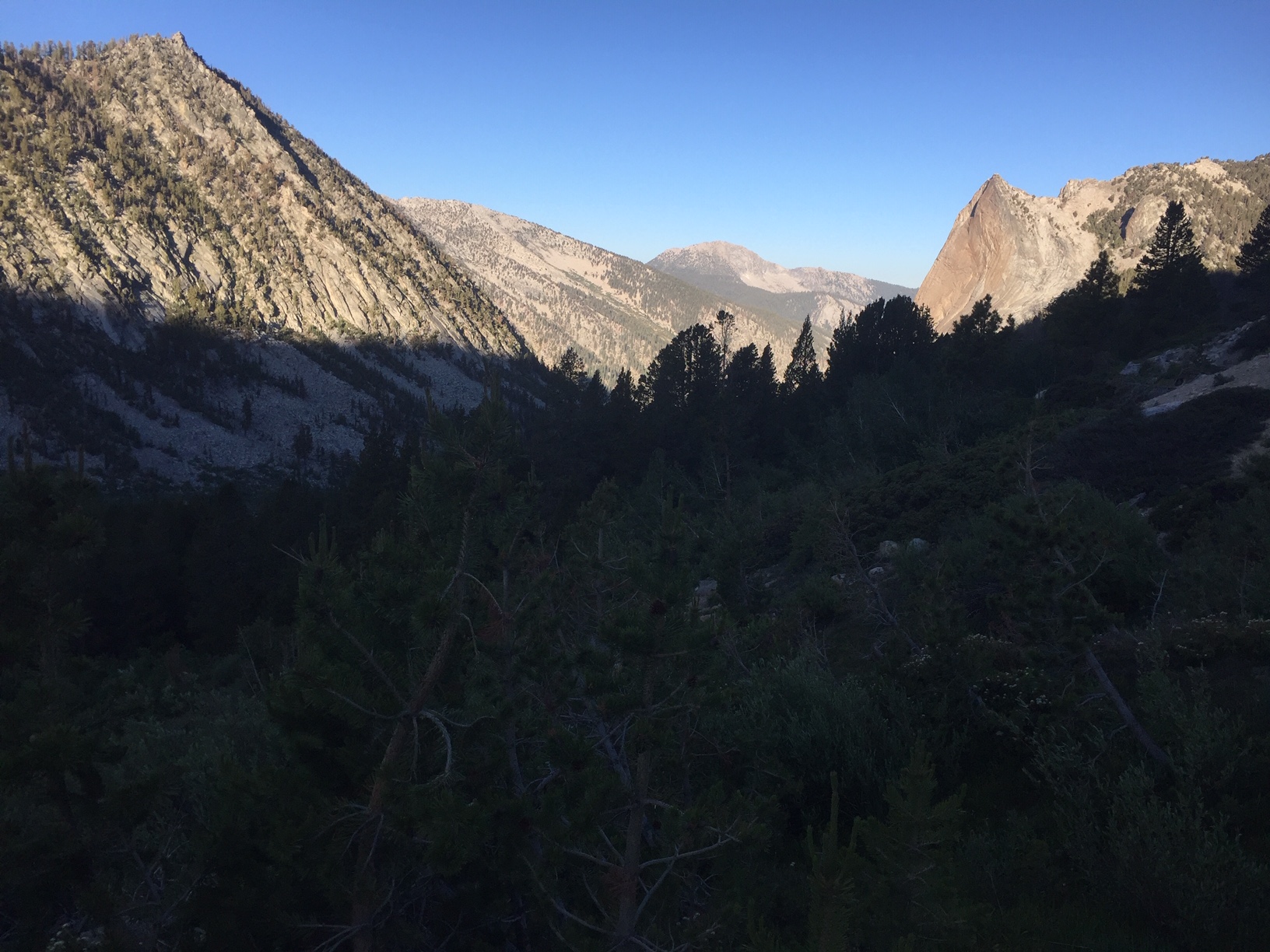 On the last Monday of June, I started the day with Zach and Kris for a half day of guided climbing at Lover’s Leap.  It was Kris’s birthday surprise present, so we headed over to the Hogwild area to climb the super fun Better with Bacon 5.7.  This climb is not the steepest, but does test your slab technique since the dikes are not as pronounced as on Lover’s Leap. 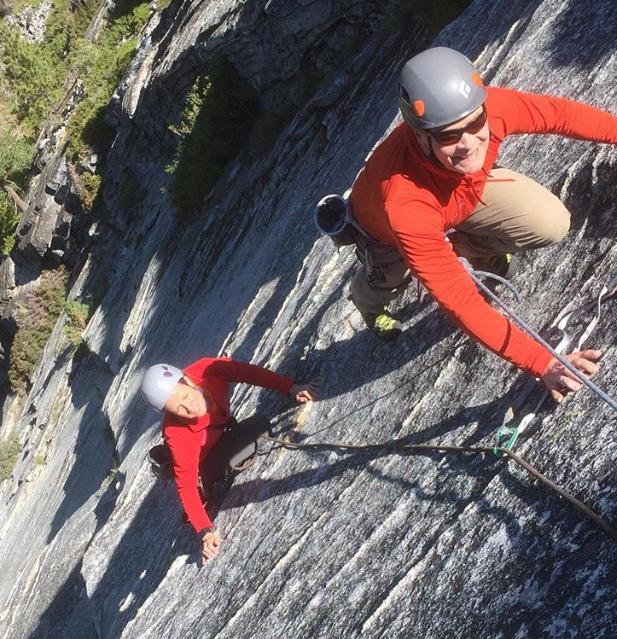 Finishing the fourth pitch of Better With Bacon!

With the quick work of the climb, we headed off to the right to get one more pitch in “Some Guy Named Larry” 5.8.

After parting ways, I shot back home on the other side of the highway 50 in Strawberry California.  Once at home I threw in my backpacking gear and food in my truck. Then headed inside and caught up on last minute business calls and emails.  I was on the road by 1:00 heading towards highway 395 and Convict Lake, just south of Mammoth.  The plan was to go up the North East Gully of Laurel Mountain.  This was my first time there, but had heard that it was a super fun and could be done quick.  Pulling into the parking area at 4:30, I knew I was cutting it close.  A quick change of shoes, water in my pack and I was off at 4:40. 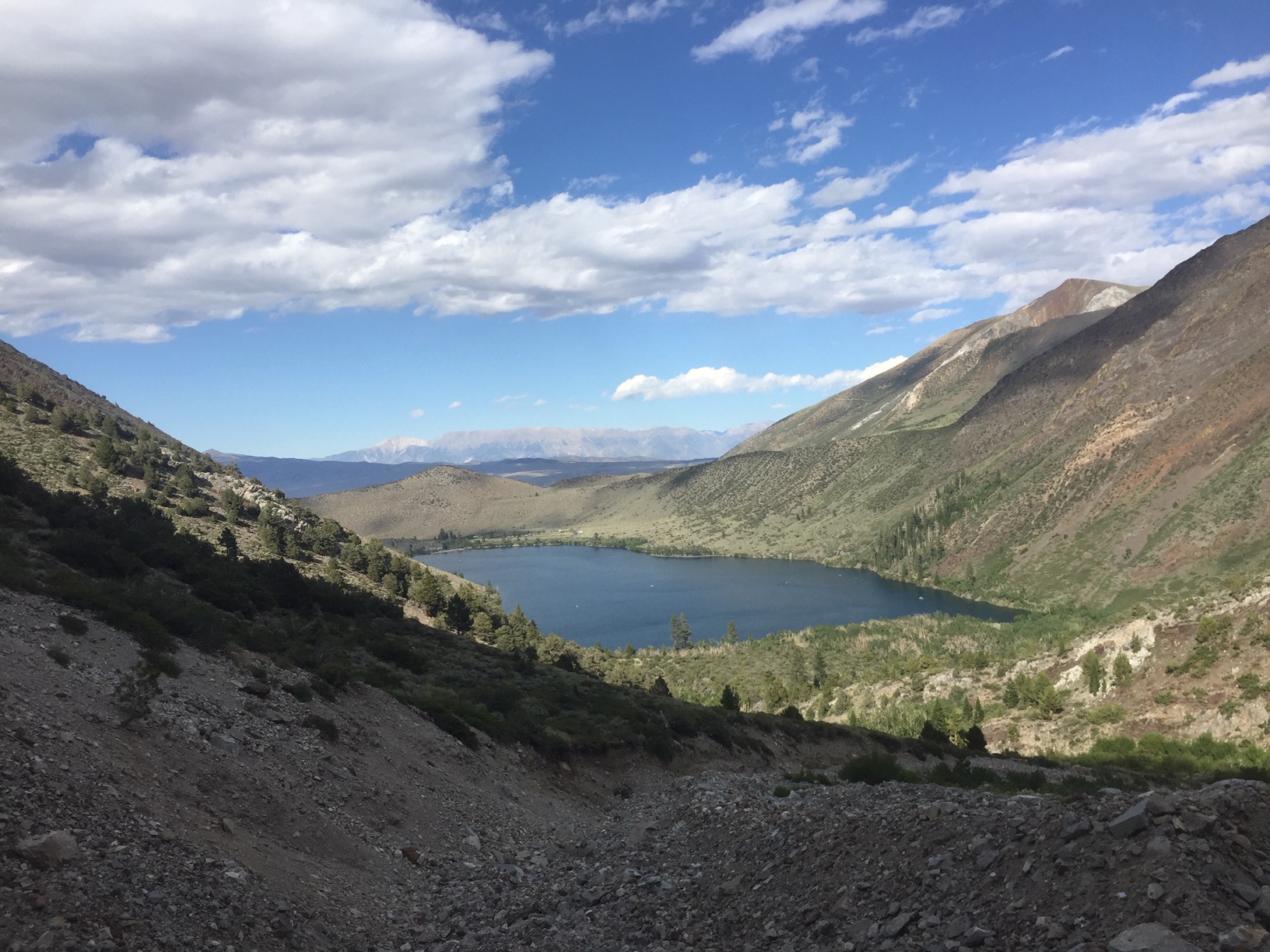 As I started to enter the gully, I doubled checked to see if I had my headlamp, and I did!

Being late in the day, I was lucky that it was all in the shade and a cool temperature for moving quick. 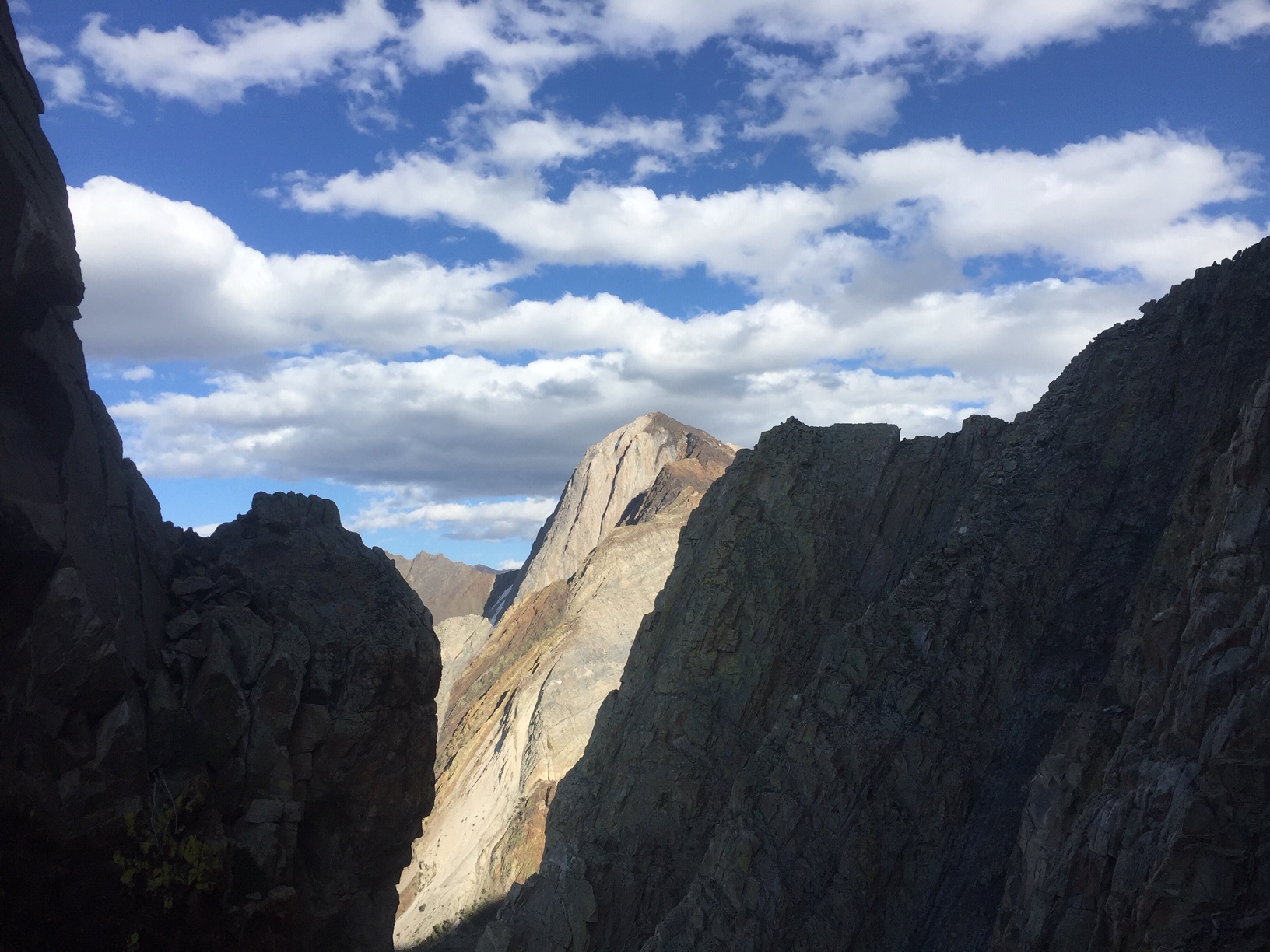 The views of Mount Morrison and Red Slate Mountain were awesome.  Moving quick,  I was still on route with a left at the first fork.  I then was intrigued by the long red chute heading up and to the left, so I veered left again, and headed up the red gully. 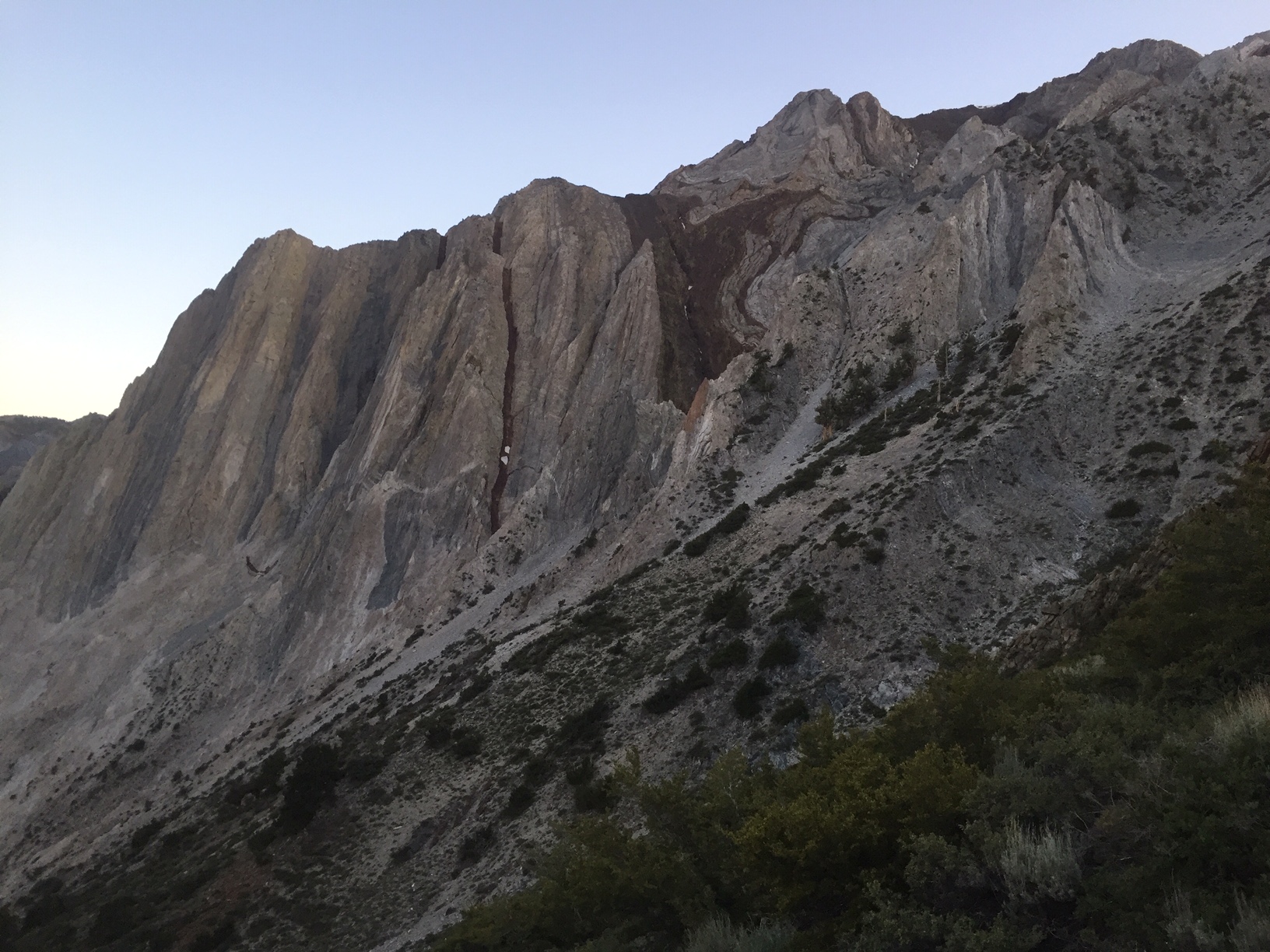 Laurel Mountain with my route just left of center

Climbing was mostly fourth class with come easy fifth and rock quality was a bit on the loose side. 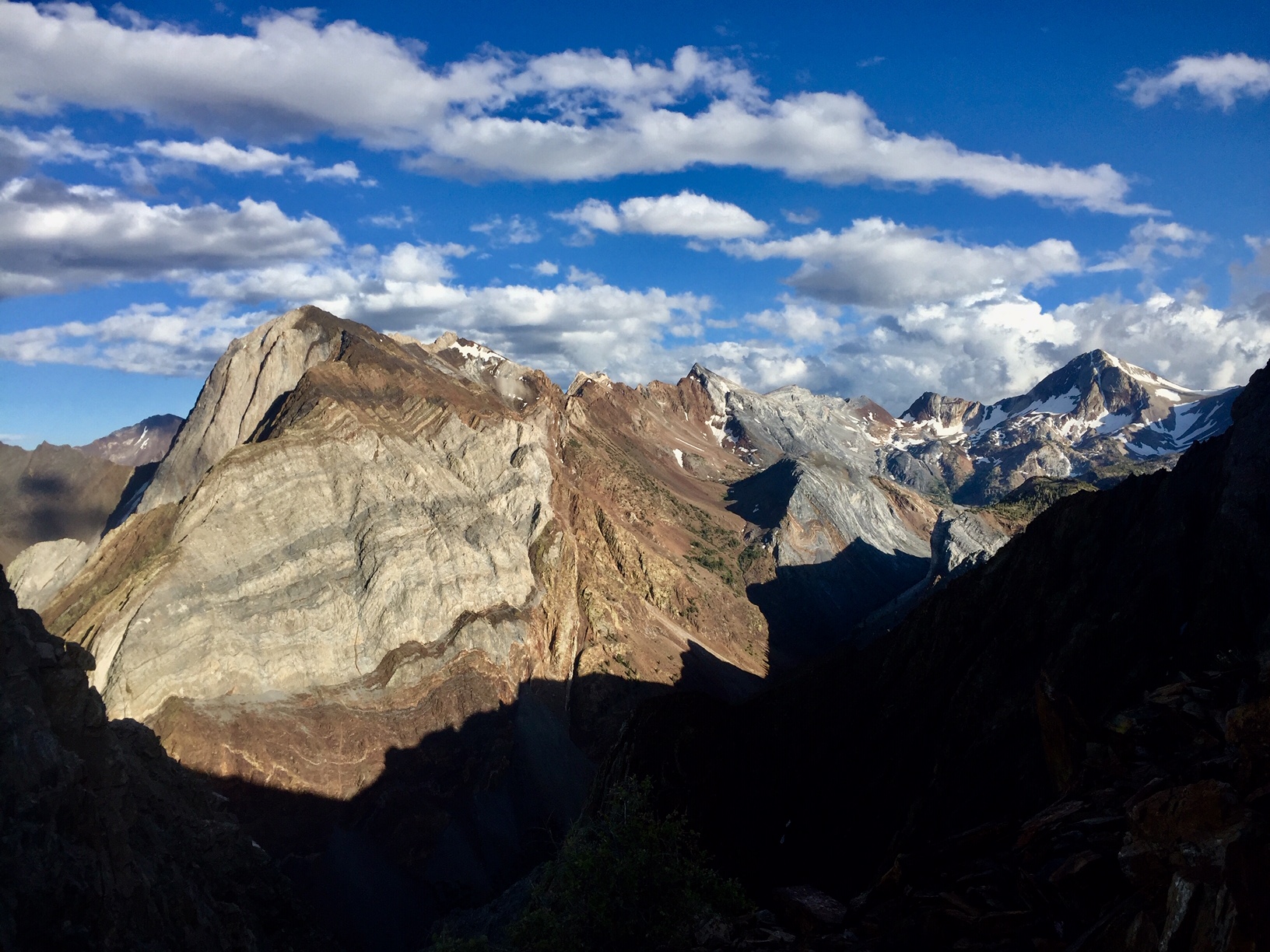 Continuing now on the ridge, a couple of false summits were encountered. 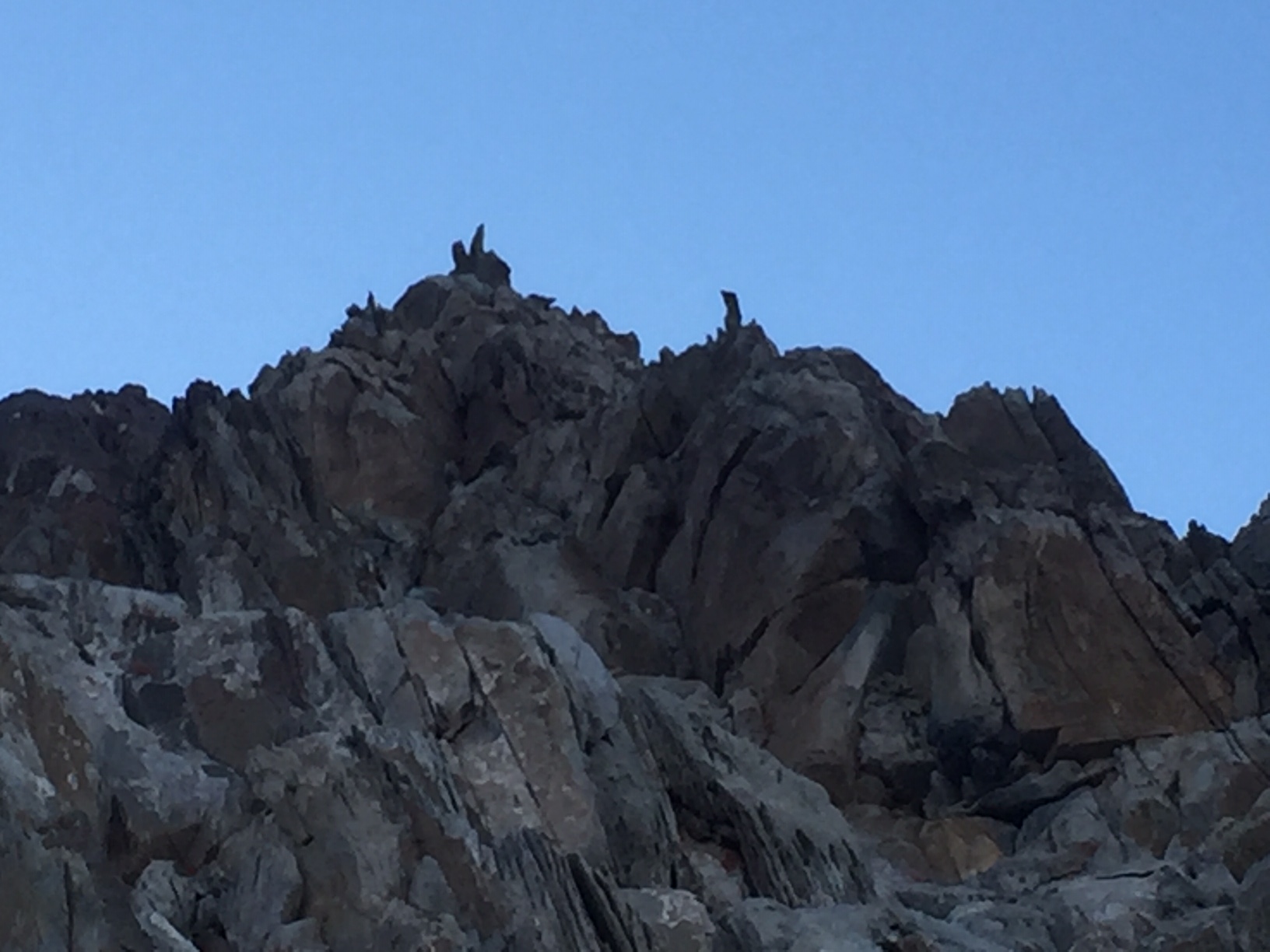 Reaching the summit of Laurel Mountain (11,812′) at 7:30 there was time for a celebratory Clausthauler! 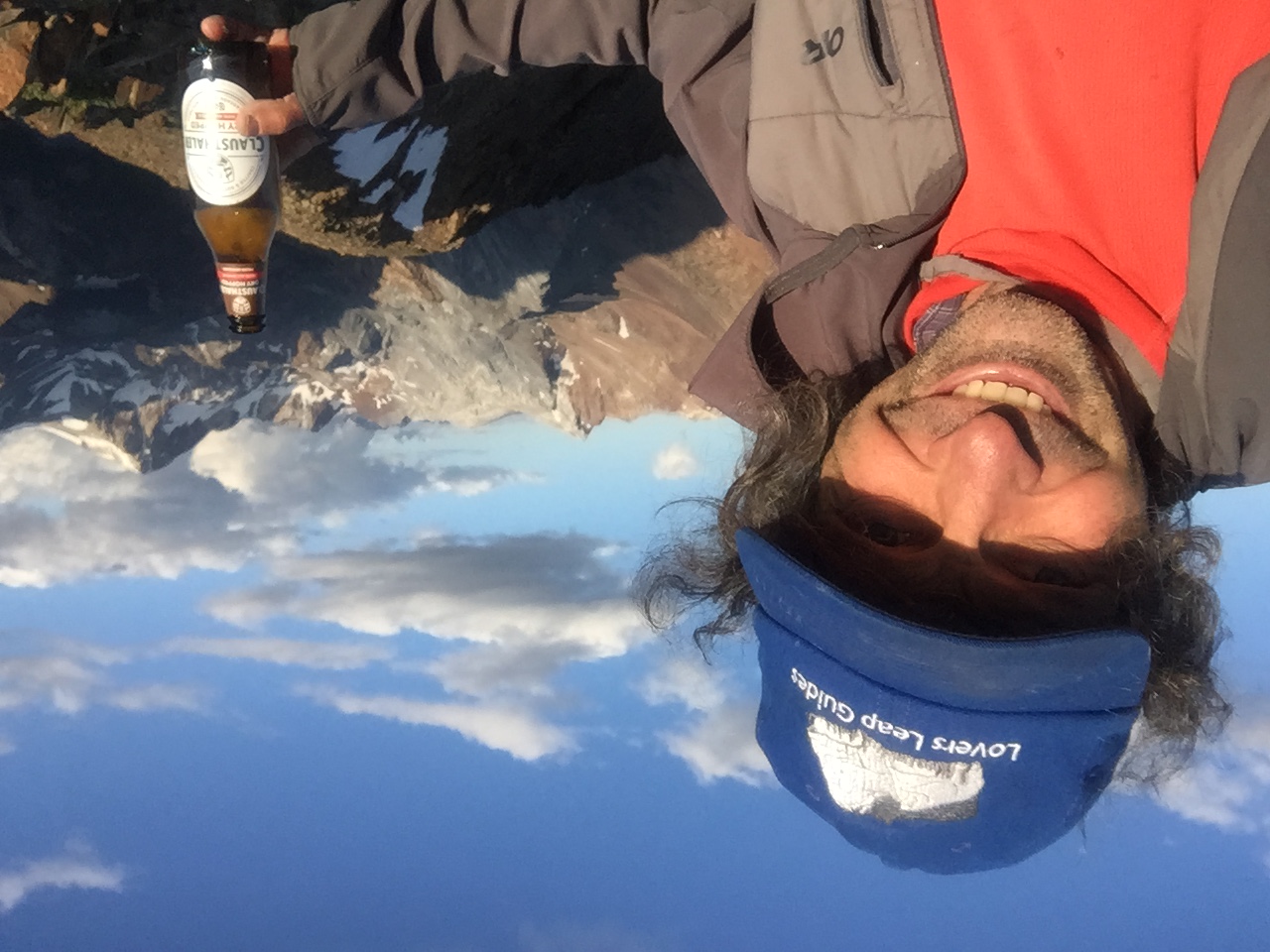 Up a mountain, down a (near) beer!

Stoked with plenty of light still left, I head down towards the east and did a little scree surfing, arriving back at the car just at dark, 9:00 p.m.

I headed over towards the Dreamers by Sherwin Summit, and met my buddy “Crazy” Tim at his bivy. 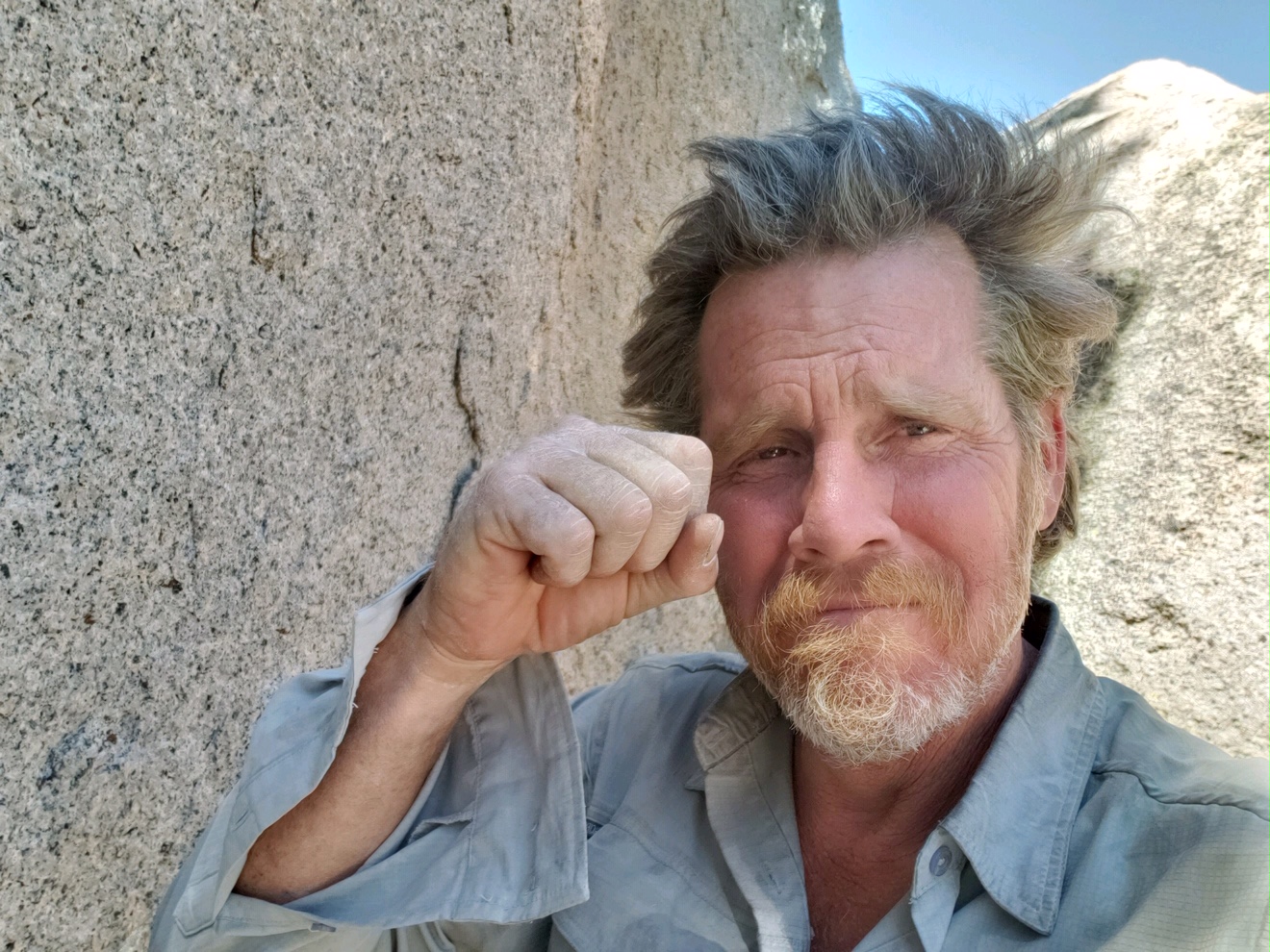 The next morning after coffee, I headed towards the town of Independence and Onion Valley. 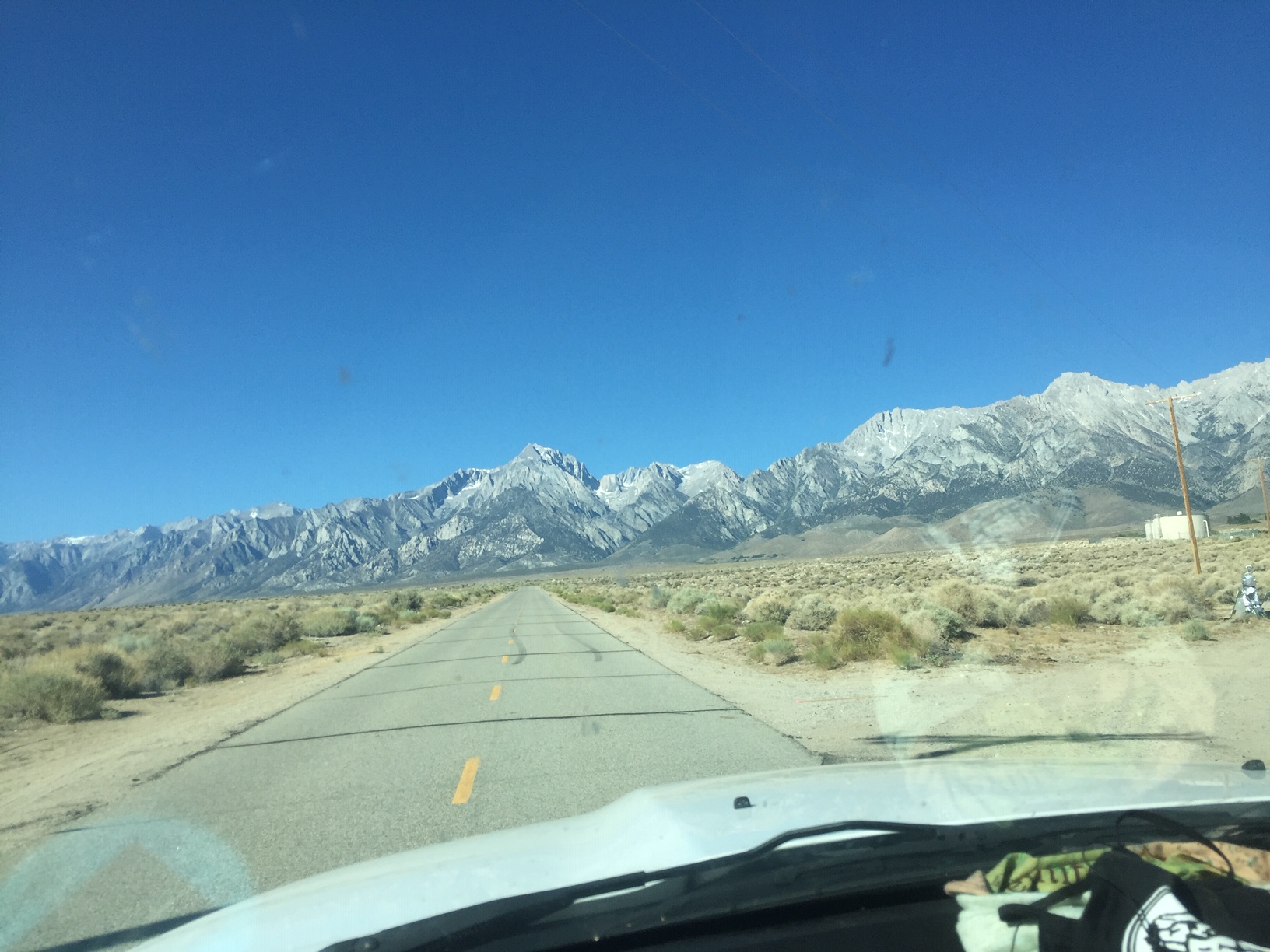 The road was super quiet except for cyclist which surprised me, but reaching the trail head, the parking lot was packed!

Last minute stuffing of my backpack and I was hiking just before 10.  A steady uphill hike, passing hordes going both ways brought me to Kearsarge pass and the view of Charlotte domes summit off in the distance.  This was my first time to Kings Canyon, and the peaks, lakes and flowers brought me tremendous joy! 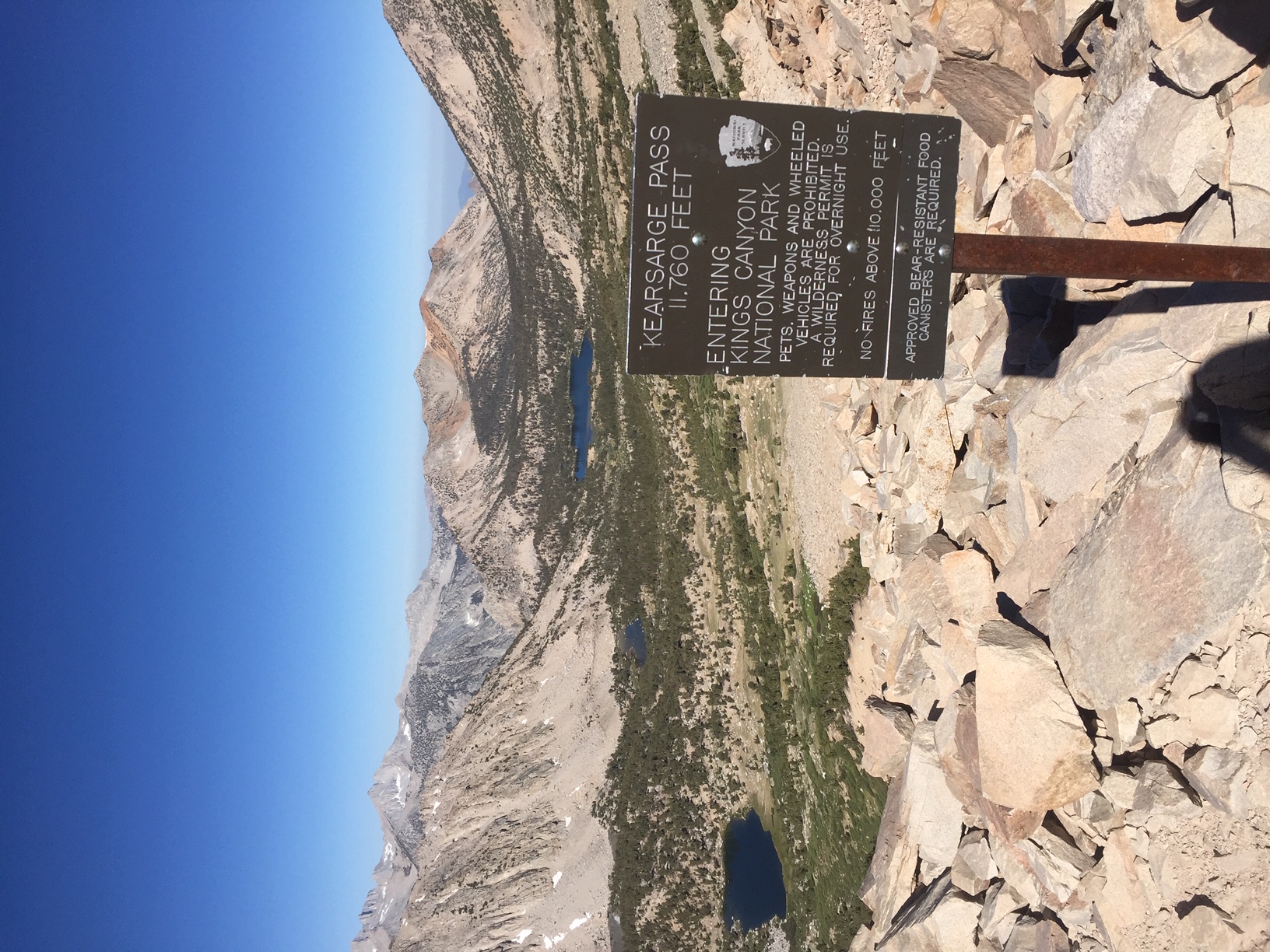 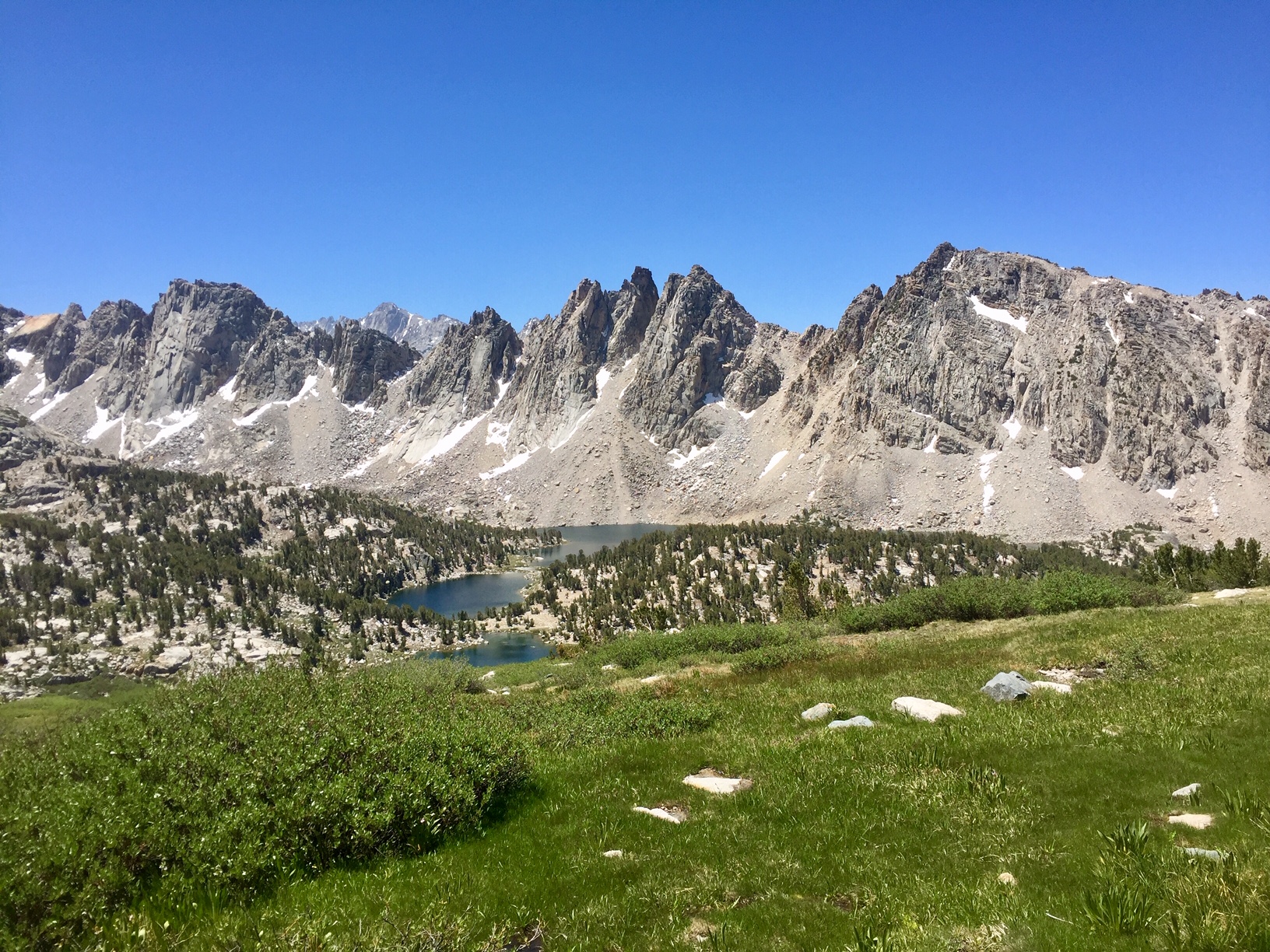 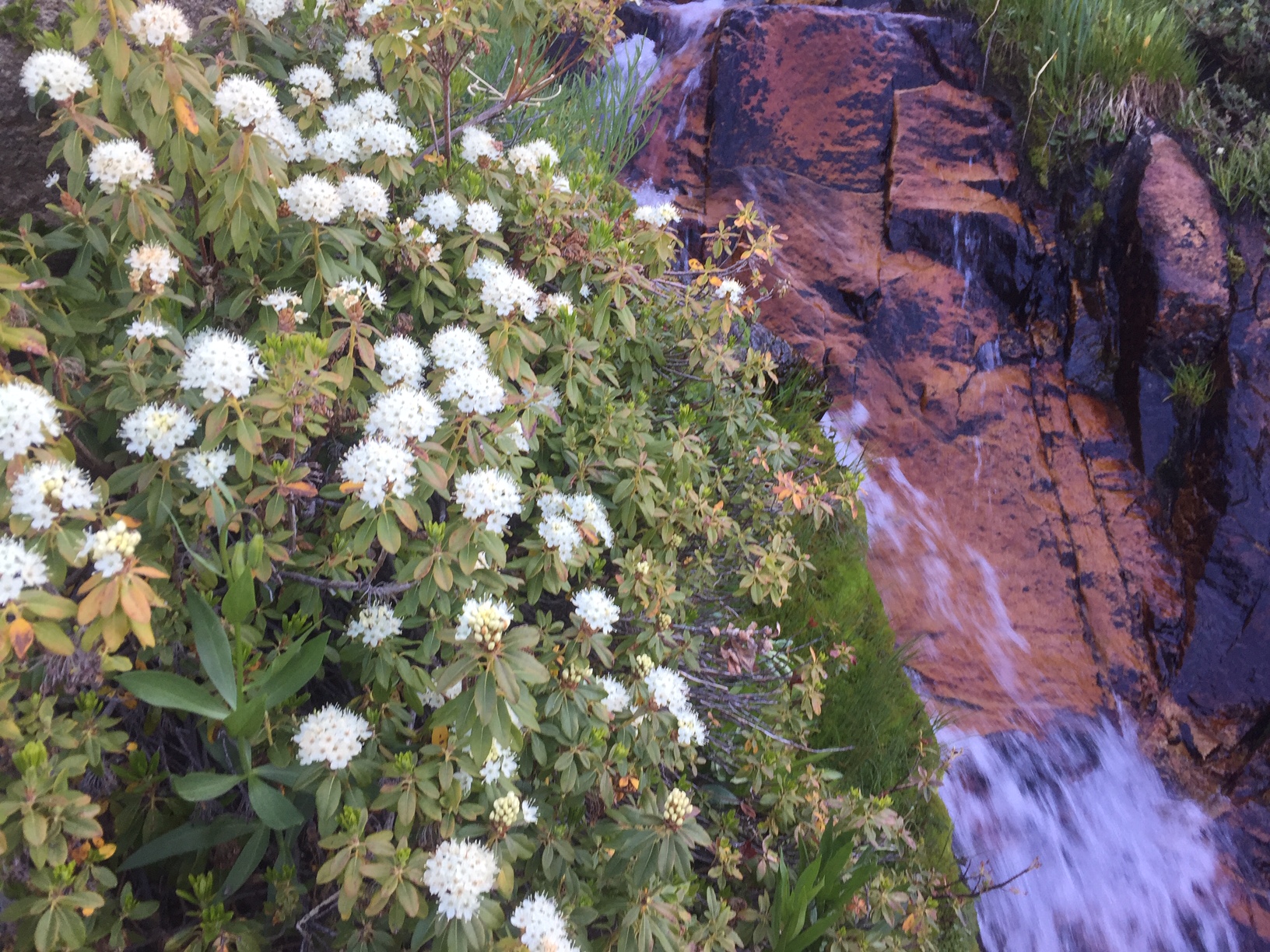 Heading down the pass, you encounter about a half mile of steep switchbacks and the people disappear.  About  three miles from the pass you cross the John Muir Trail/PCT, then a bit further Charlotte Lake. 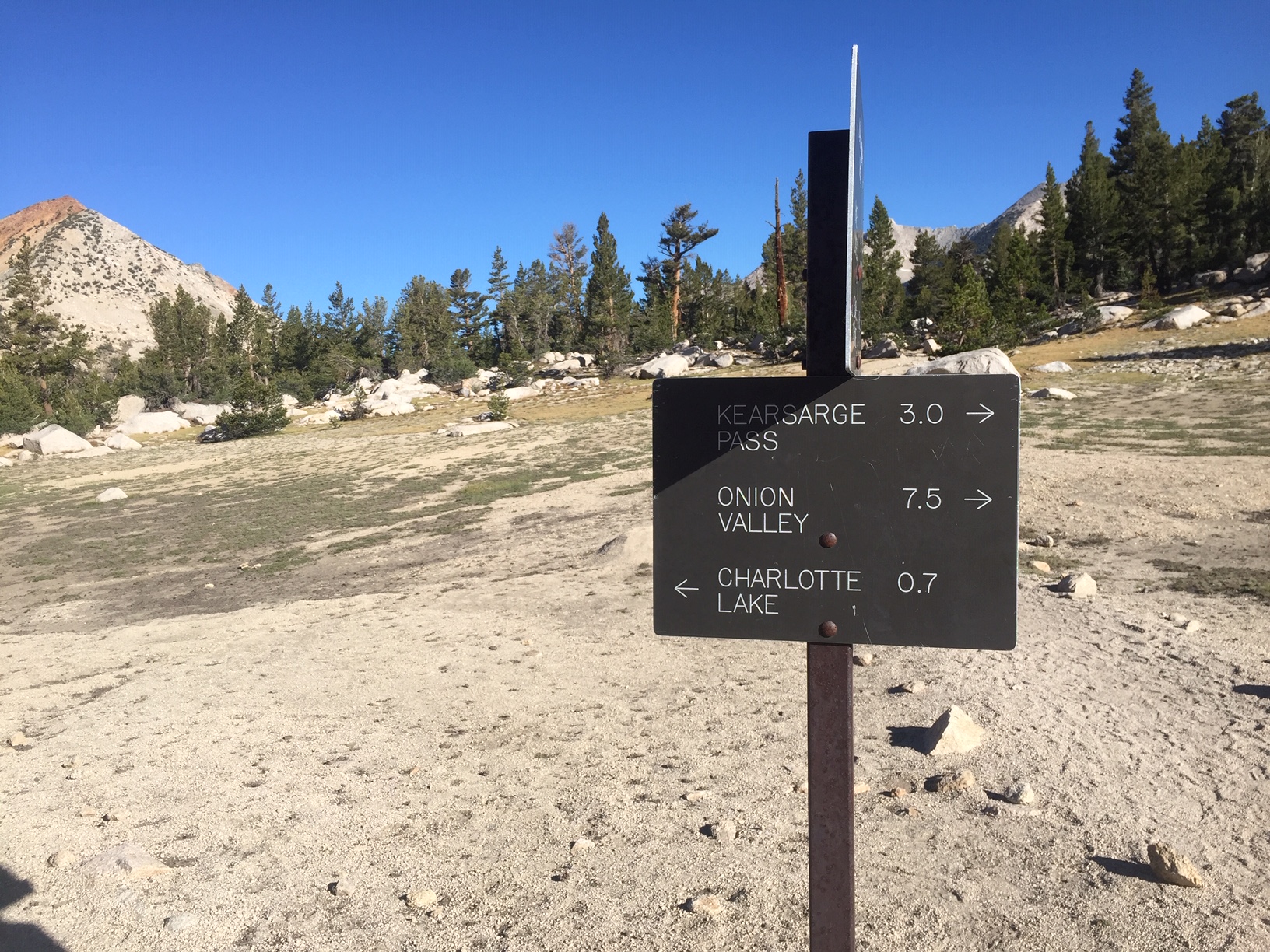 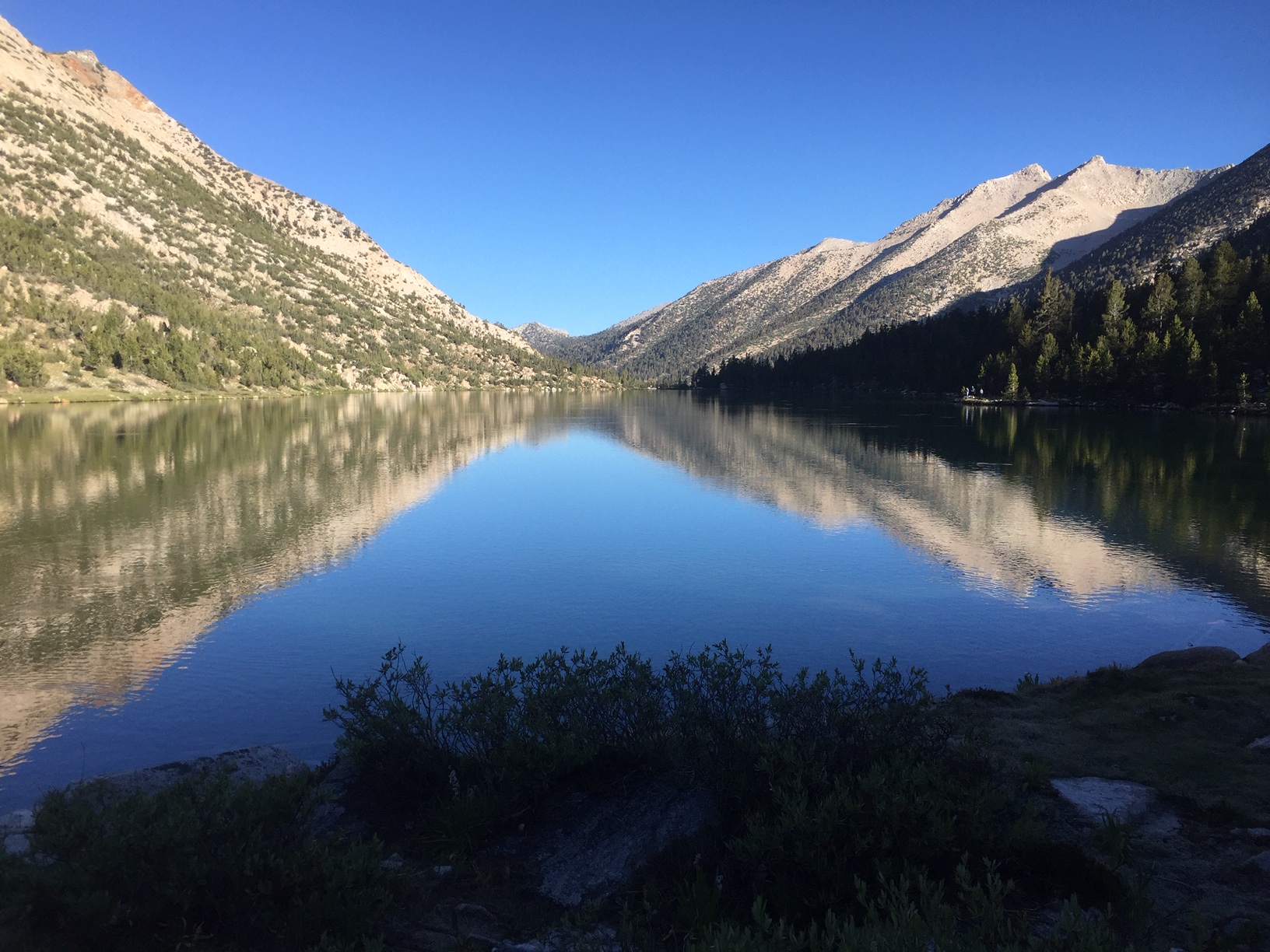 After the lake, you leave the main trail and get on sometimes not a well defined trail through meadows, aspens groves, manzanita, and eventually to your first view of the mighty Charlotte Dome. 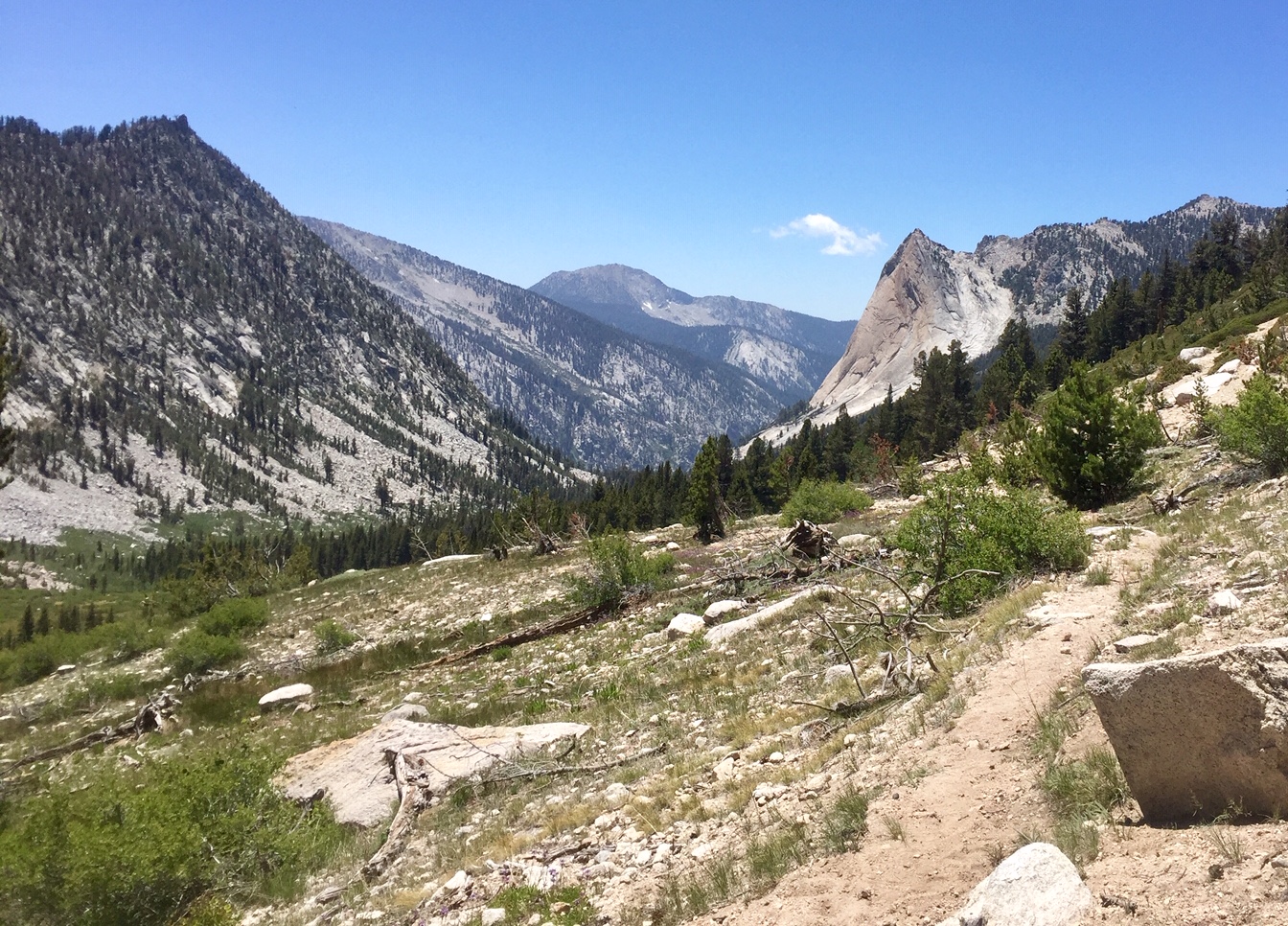 Seeing it with all it’s glory and power, I suddenly felt really small! 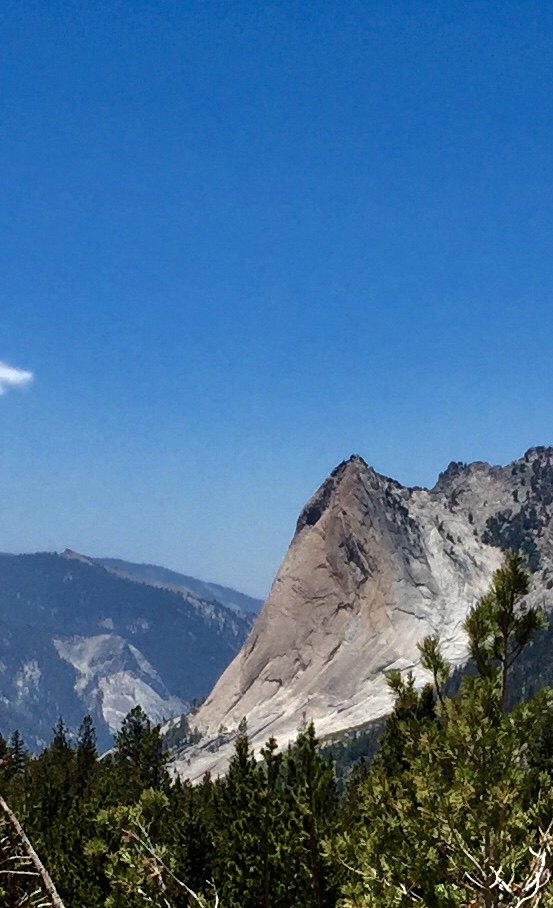 Reaching the creek just before the dome and missing the trail that leads uphill to the sweet campsites, I found a small bivy for one.  Pumped some water and decided to go do the climb now, instead of the following day and hiking in the heat. Heading over to the base, I heard a party topping out, which meant that I had the dome all to myself.  Finding the start, I began climbing around 4:30 and was surprised by the lack of chalk on the first couple of pitches.  Seemed like I was on route, and confirmed it when I found the traverse heading towards the Slot.  I was really happy how featured and solid the climbing was and had ear to ear grin as I continued up to the “Furrow” pitch. 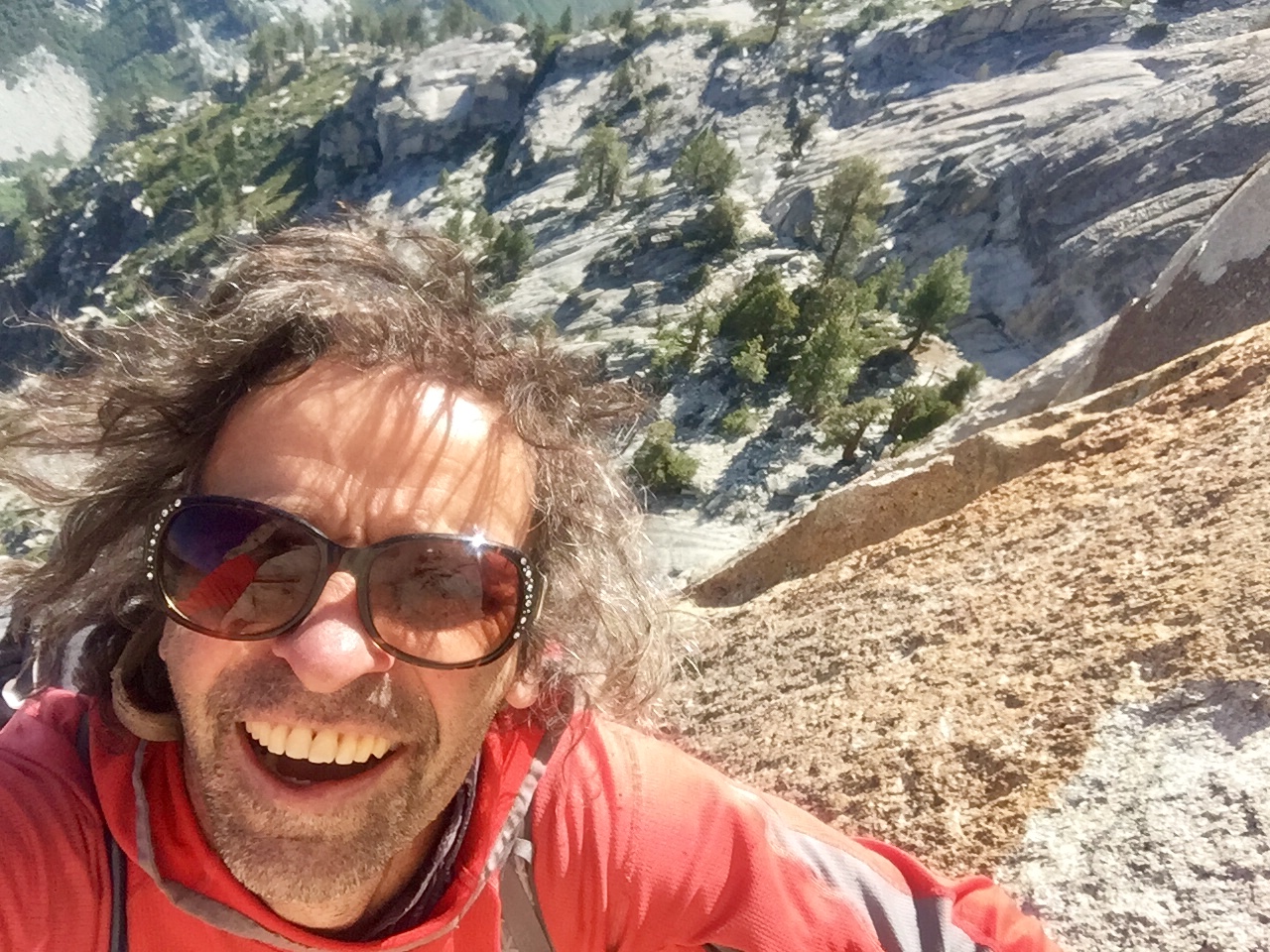 Topping out around 6, I hung out for a while and took in the views of the surrounding peaks.  There is a lot of rock out there with some big approaches! 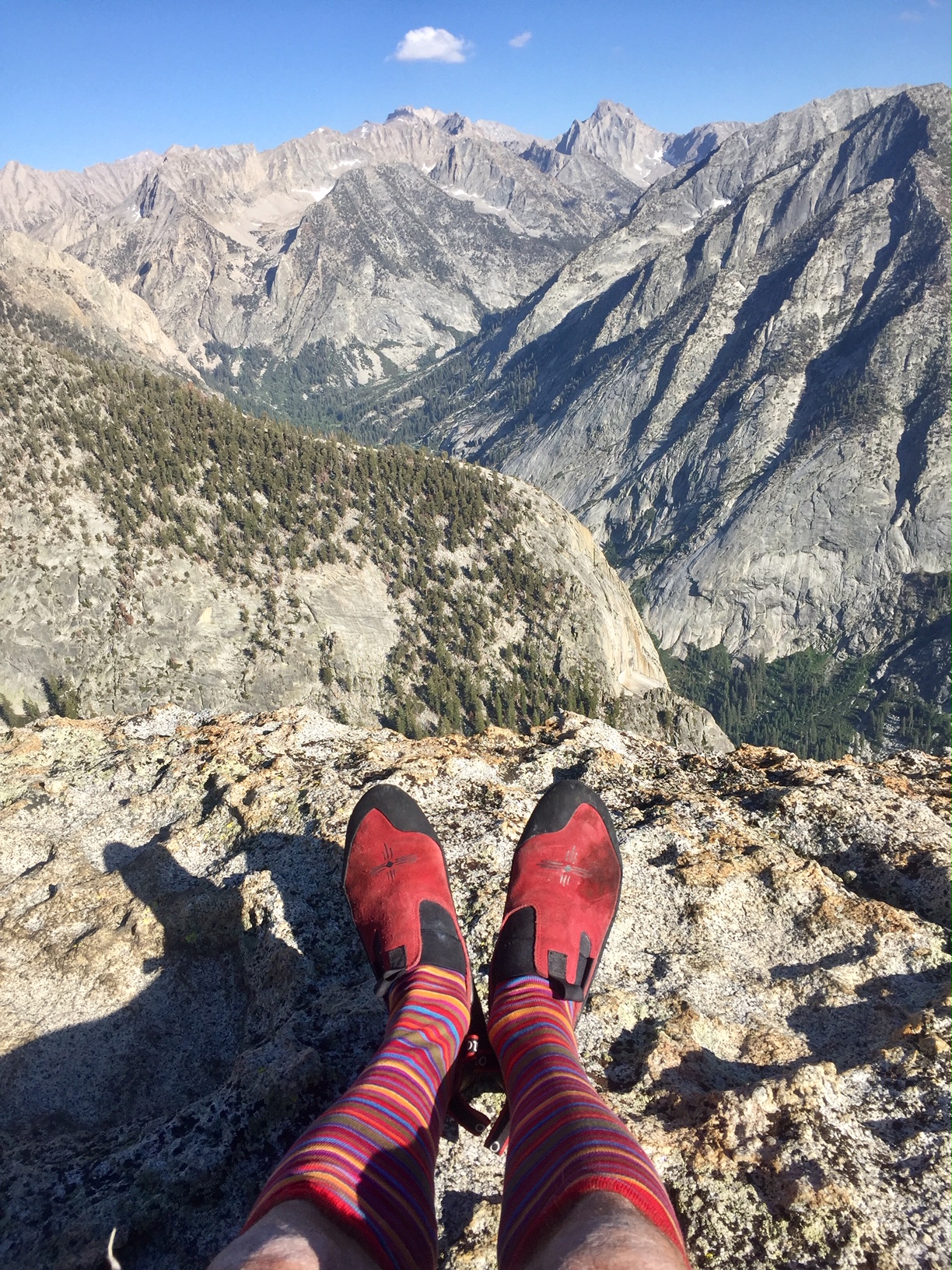 Kicking it on the Summit 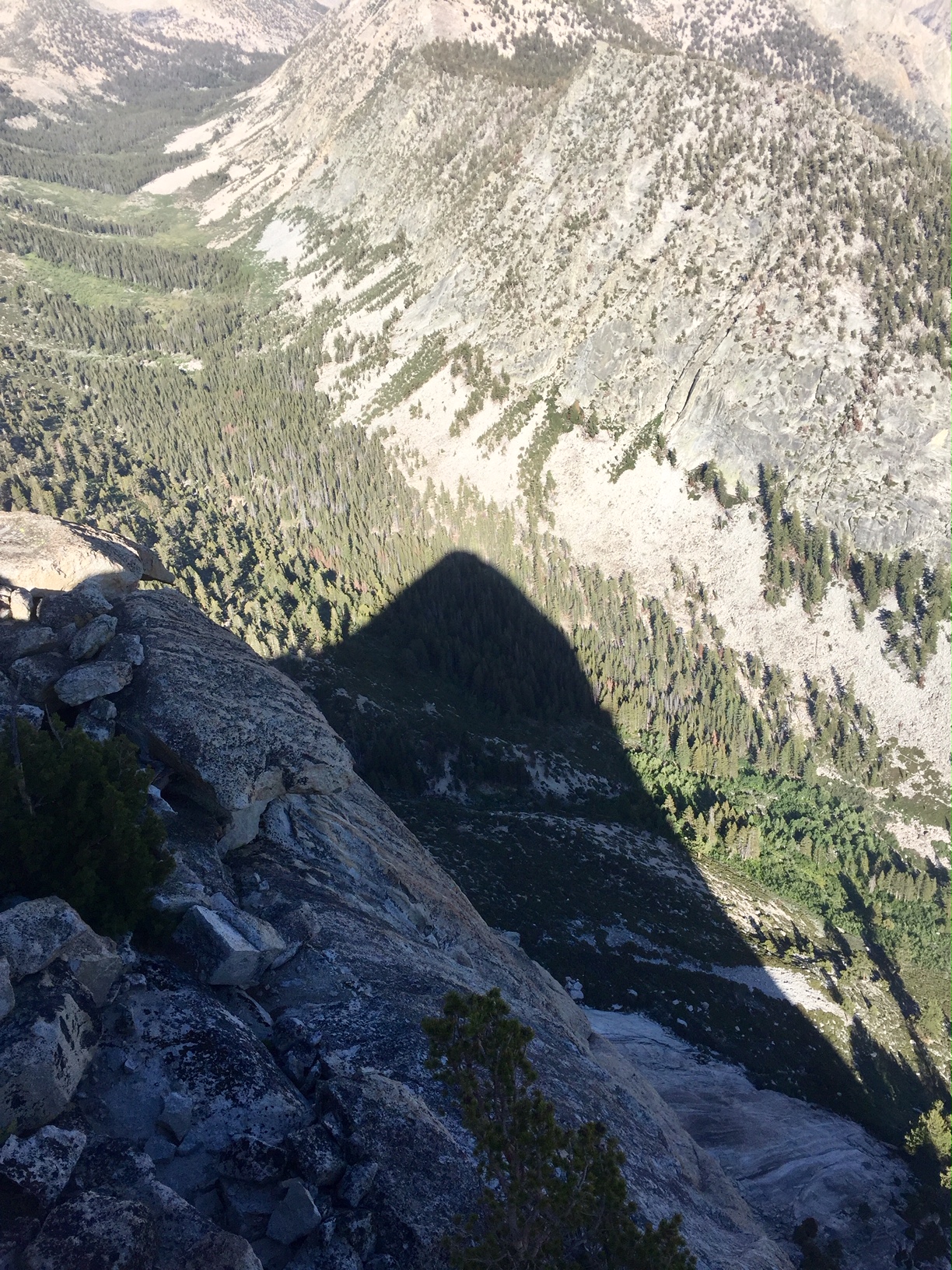 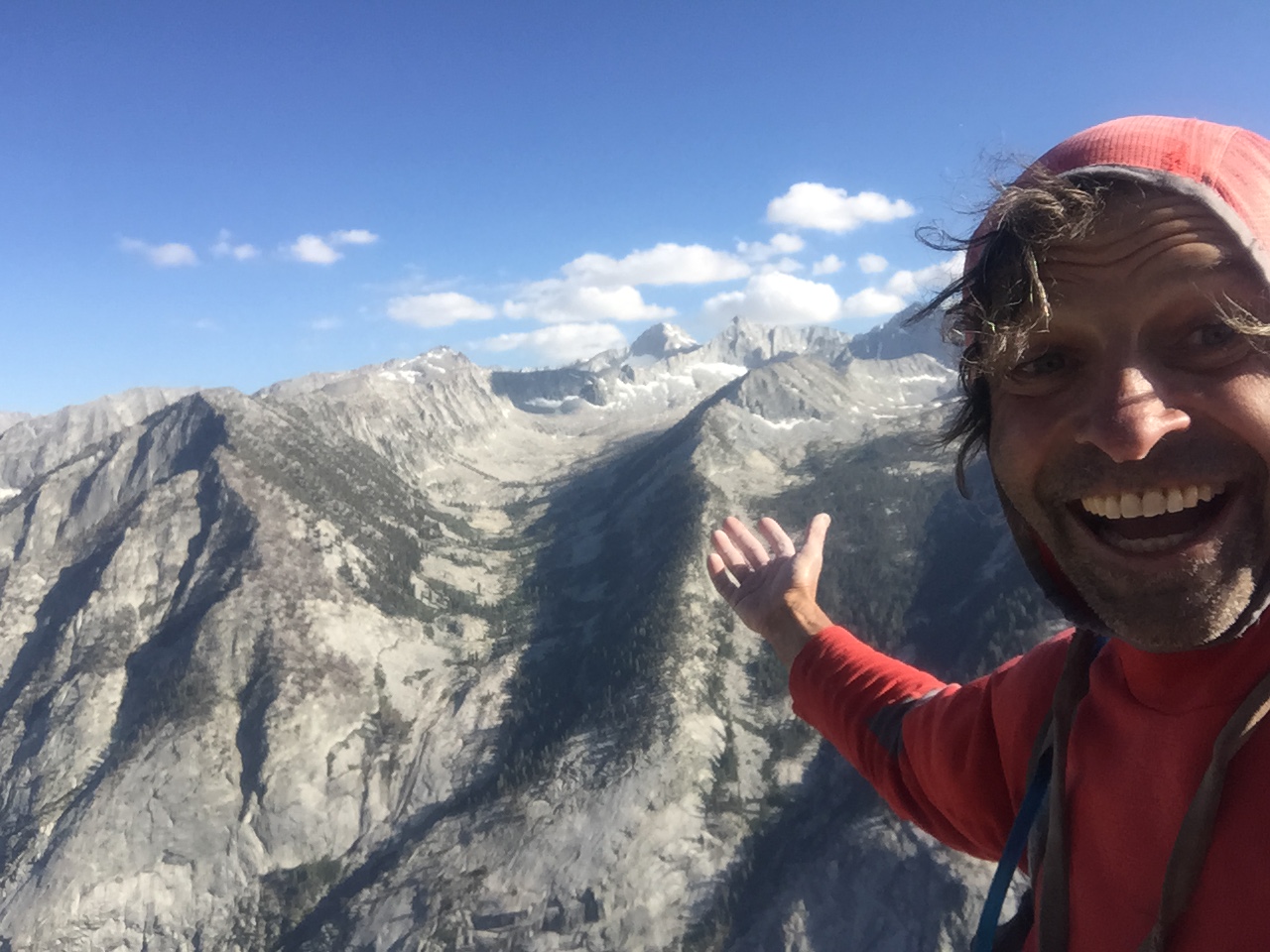 A super fun descent across the ridge then down slabs led me back to camp.  Sunset, dinner, and night under the stars ended an amazing day on one of the funnest routes I have ever done.

The next morning I was hiking by 6:30  making  good time and was back at the car a little after 11.  A bacon cheeseburger was on order then the drive back to Lover’s Leap, Strawberry California.

Are you heading to Lake Tahoe this summer?  Come climb with us  at Lover’s Leap Guides where we have a passion for climbing and the mountains.

Hope to see you out there!

Petch has been climbing since 1989 and has passion teaching and guiding as much as he does for climbing. At the end of an eight month climbing trip that took him and his partner from Joshua Tree in Southern California to Devils Tower in the eastern part of Wyoming, and everything in between, the final stop turned out to be Lover’s Leap. The right turn towards Lover’s Leap landed Petch in the campground in 1993. Climbing for eight months and a bank account of zero, he quickly found a job at the Strawberry Lodge. Falling in love with Lover’s Leap and Strawberry he found making a home easy. A guiding job opened in 1996 with teaching youth backpacking and rock climbing. The exciting future of guiding as a full time profession led to the opening of Lover’s Leap Guides in 2003. With his enthusiasm and knowledge of Lover’s Leap, Lover’s Leap Guides has become the most popular and busiest service to climb at Lover’s Leap. He has spent countless hours working with the Access Fund, CRAGS, and the Forest Service to maintain trails, protect nesting raptors, and community outreach. Climbing most of the routes at Lover’s Leap, he has also added numerous routes of his own. From 5.5 to 5.12D, some of his first ascents have become modern day classics. A good chance you will probably climb one of his routes when you climb with Lover’s Leap Guides. Petch is certified by the AMGA as a Rock Instructor and holds his certification as a Wilderness First Responder and CPR. 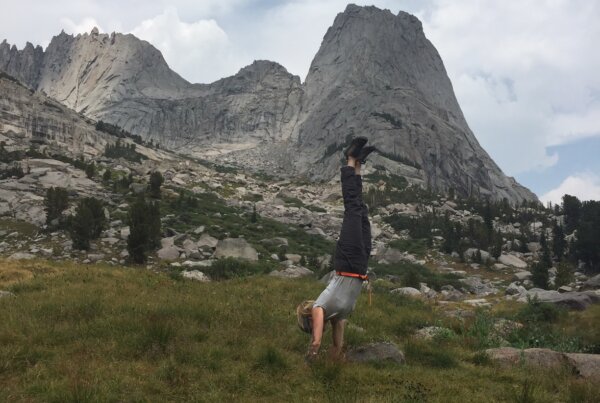 August in the Wind Rivers! 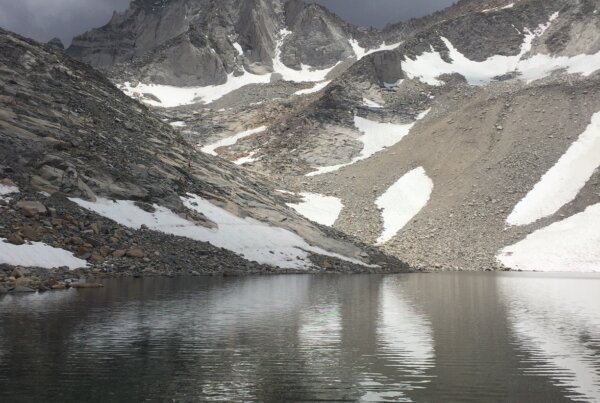 Climbing in the Sierras with Flower Power!! 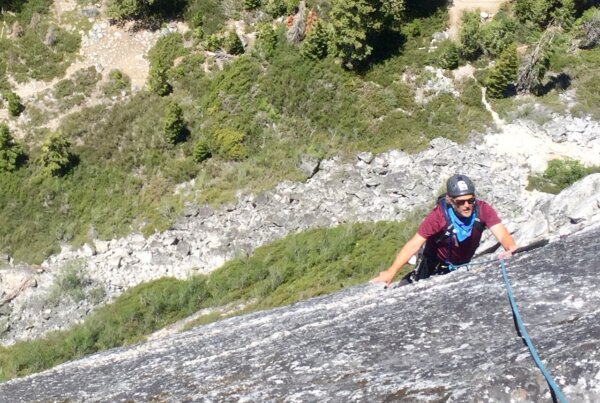