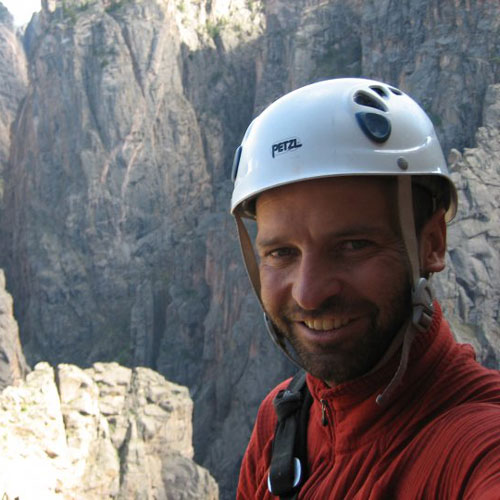 Only in the Sierra’s can a 600-foot tall granite slab that runs for over a third of a mile down a shallow, forested canyon be considered a hidden gem. Yet in the shadow of it’s more prominent neighbors Half Dome and El Capitan down in Yosemite, Lover’s Leap is a relatively unheralded monster in the climbing and adventure community, relegated as a kind of a low-key locals spot on the southern edge of the Lake Tahoe region. Yet, like everything in Lake Tahoe, this “low-key locals spot” is actually a world-class sweet spot that never seems to be anything less than a perfect hang with a beautiful backdrop.

The Leap — as its affectionately known — first began to be developed in the 1950’s when climbing was a nascent recreation in California, especially in the Sacramento community. Yosemite and it’s national profile always had the attention of the masses as climbing and outdoor recreation took a foothold in the public’s consciousness through the 1970’s, the granite making heroes out of those who dared ride its rhythms. Yet it was these same heroes who seemed to be drawn to The Leap when everyone else wasn’t looking.

The legendary Royal Robbins started his climbing school at the base of the cliff in the 1970’s. The rock proved a perfect learning tool, a huge moderate wall of 5.5-5.9 ascents with stripes of dykes that punched out of it. It was inviting enough for novices to try their hand, yet exposed and intimidating enough to challenge the experts. Local Tahoe legend Shane McConkey showed how perfect that rock could be as a ramp, using The Leap as an adventure art piece as he skied of it’s summit into a daring low-altitude base jump in the early 2000’s.

It’s served as a community playground for so many over the years and local climbing legend M. “Petch” Pietrolungo is someone who has been playing here a long time. The climber and adventure guide owns and operates Lover’s Leap Guides and came to The Leap in 1993 when the only thing he owned practically was climbing shoes and a passion to explore the wall. He had been living out of his car for a year and turning right from Route 50 into the hamlet of Strawberry and to the base of the wall capped an eight-month tour climbing around the west for Petch.

He certainly didn’t realize as his rambling trip across the west was ending, a new adventure in nesting was just beginning. Petch just wanted to get his hands on some rock. But like a lot of people in Tahoe, the dirtbag climber who swore he was just there for a couple days ended up staying for over 25 years. Climbing sessions were augmented with tending at the local bar, hocking impromptu $100 guide sessions from patrons who wanted to climb. One of these gigs with a guide owner led to a steady job as a guide, eventually leading to Petch getting his own permit in 2003. Demand over the past couple years has led Lover’s Leap Guides to grow from a one-man operation to small collective of experts leading novices and challenge-hungry vets alike up those hallowed walls.

Petch is a world-class climber who has put up a number of first ascents and routes up Lover’s Leap, impressive considering how tracked over it had been by the time he started climbing. But you wouldn’t know it unless you talked to the right people. Petch is just doing his own beautiful thing at his own beautiful rock, an unheralded gem in an area that’s full of them.

The following is a conversation with Petch Pietrolungo. It has been edited for clarity and length.

From a climber’s perspective, what is the general vibe and overall character of The Leap?

It’s pretty moderate, stacked with climbs from 5.6 to 5.9, which opens up to pretty much everyone. There’s a lot of hard climbing but it’s not known for that, it’s known for the multi-pitches that are 300 to 600 feet. Super accessible, short approach, easy decent, with the lodge and general store right there. It’s pretty ideal. If this cliff was in Yosemite, it would be the busiest cliff because it’s just that good and fun. No matter what level you are climbing at, it’s steep and exposed and beautiful.

Where do you see it’s weird eccentricities?

What makes it super unique is the dykes, which are these horizontal bands that go throughout the cliff. Some places it’s like grabbing a ladder rung, they stick out so far. So you have these really steep pitches but these massive hand holds. You find dykes in other climbing areas, but not as abundant as you get here. Just down the road is Phantom Spires and Sugarloaf and around Echo Lakes and Horsetail. It’s a really unique climbing area, I’ve never climbed in a spot like this.

What are some of the first ascent routes you’ve done?

Living here so long and looking at it for so long, you begin to see things in a different light. Sometimes literally, where you might catch a crack system you normally don’t see. I did “Better with Bacon” on The Hog’s Back. In that same general area, my friends and I have put up the majority of the routes there. They tend to be fun, lower-angle climbs for guiding. On the mainwall I’ve found routes up the middle that go about 600 feet, which is pretty bitchin’ cause this thing has been climbed for so long. I feel very fortunate to have ticked a few good routes.

Doing first ascents is super rewarding for me. A lot of climbers do project climbs and it’s their hardest. All of my hardest have been first ascents because those are the one’s I’ll keep coming back to. First ascents are more of the adventure, more of the unknown. You just walk to the cliff and go up and see what happens (laughs).

What’s some of the history of the people who have lived and played in the Strawberry area underneath The Leap?

In the late 70’s and early 80’s you had the harder climbs going up, like Jay Smith and Paul Crawford; Rick Sumner wrote a couple guidebooks. Crawford is still in the area, still really strong and a good climber in his 60’s. I still see him and we’ve put up some routes together, which is really cool. Late 80’s and 90’s was the core of first ascents. Then they started going to all these other areas like Cave Rock and Calaveras Dome and the development of The Leap stopped. I picked up where they left off.

Climbers can be very territorial and protective of areas and you are a conduit in some ways for expanding people’s interest into spaces that maybe some don’t appreciate. Have you ever received any pushback within the climbing community for the role you play in that exchange?

We’ve been really conscientious in not being a certain type of guide company. The reason for so many of those first ascents by The Hog’s Back was to bring people to less popular areas where I’m not interfering and camping out on the classic rock so I can hog it all day; that’s not right. It can be a busy place. We specialize in a lot of small groups and private guiding and when we have a larger group I am not going to the more popular areas. I’ve set up a little boulder away from everyone where I can teach rope and anchor courses.

If I have a route set up, I tell people to jump on my rope if they want to. We’re really respectful towards that and we want to be the resource if you need information, help or want to borrow something. We’re stewards and want to be known as that. The community has given us a lot and we wan’t to give back to the community as best we can.

What’s it like to have this piece of nature be so integral to your life in so many ways, from literally living off the rock for income to having it be your place of play and adventure?

I feel so fortunate to have landed here and how most of everything has worked out. When the shutdown happened in March and so much was unknown and eerie, I would just walk out my door, over the highway, across a log on a river and I was at Lover’s Leap. I’d go for a quick walk before working on something at my house and then five hours later I’m just walking around and taking it all in. It was “The Big Reset” and nature was winning.

I felt so bad for people who had to step outside their door into an elevator and step out my door to one of the most beautiful places there is. Climbing here for as long as I have, I love climbing here more. It was my therapy to go out there. I’d climb until dark and walk down with the night birds. How the fuck did this happen to me (laughs)?

Petch has been climbing since 1989 and has passion teaching and guiding as much as he does for climbing. At the end of an eight month climbing trip that took him and his partner from Joshua Tree in Southern California to Devils Tower in the eastern part of Wyoming, and everything in between, the final stop turned out to be Lover’s Leap. The right turn towards Lover’s Leap landed Petch in the campground in 1993. Climbing for eight months and a bank account of zero, he quickly found a job at the Strawberry Lodge. Falling in love with Lover’s Leap and Strawberry he found making a home easy. A guiding job opened in 1996 with teaching youth backpacking and rock climbing. The exciting future of guiding as a full time profession led to the opening of Lover’s Leap Guides in 2003. With his enthusiasm and knowledge of Lover’s Leap, Lover’s Leap Guides has become the most popular and busiest service to climb at Lover’s Leap. He has spent countless hours working with the Access Fund, CRAGS, and the Forest Service to maintain trails, protect nesting raptors, and community outreach. Climbing most of the routes at Lover’s Leap, he has also added numerous routes of his own. From 5.5 to 5.12D, some of his first ascents have become modern day classics. A good chance you will probably climb one of his routes when you climb with Lover’s Leap Guides. Petch is certified by the AMGA as a Rock Instructor and holds his certification as a Wilderness First Responder and CPR. 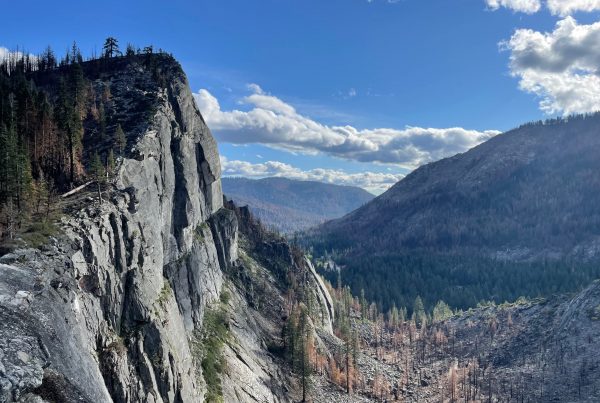 CRAGS Interview about the Caldor Fire 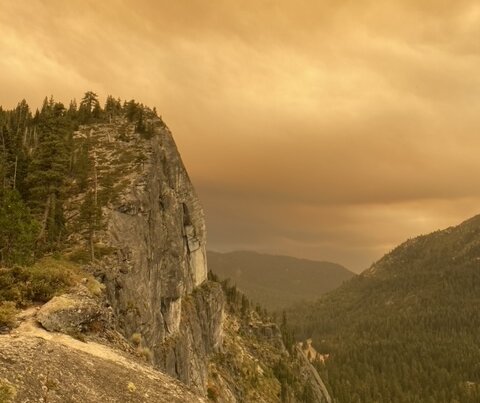